Frank Lloyd Wright house in Glenview to be auctioned 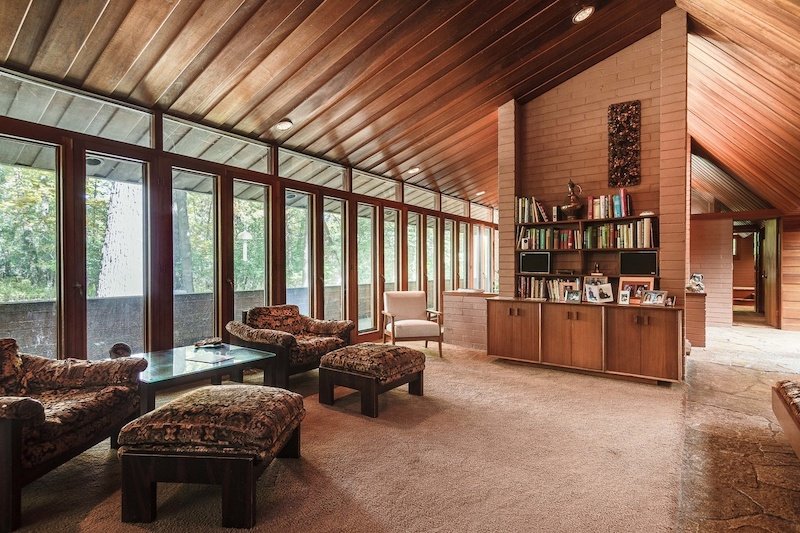 Built in 1950 and owned by the same family since 1965, the house has been on the market since last fall. An auction may help accelerate a sale.

BY: DENNIS RODKIN
Jameson Sotheby’s International Realty
A Glenview house designed by Frank Lloyd Wright is going up for auction.

The house, secluded on a wooded lane called Portage Run, came on the market in September, priced at a little under $1.7 million. Built in 1950, the house is being sold by Brian Busche, whose now-deceased parents bought it from the first owners 56 years ago.

The property’s listing agent, Erica Goldman of Jameson Sotheby’s International Realty, announced in her online listing May 10 that the house will be auctioned in mid-July.

The house has a steeply peaked mahogany ceiling, built-in benches in the inglenook space around a central fireplace, walls of windows and other details that Wright designed to link the interior to the forested setting outdoors.

Wright also used a pierced concrete block with a wing-like cutout that suggests leaves or birds’ wings, another evocation of the natural surroundings.

Since putting the house on the market in September, “We’ve had offers,” Goldman told Crain’s, “but they didn’t reach the number the seller wanted.” An auction may accelerate the process of getting it sold by signaling the sellers’ willingness to deal.

Goldman’s listing says the suggested opening bid is $1.2 million, but Diana Peterson, whose AW Properties Global Auction Works will handle the online auction, said that the seller is unlikely to settle on a price that low. In the curious parlance of an auction, Peterson told Crain’s that the seller has what’s known as an “unpublished reserve,” or an undisclosed price below which he doesn’t plan to go, and that the reserve is above the suggested opening bid.

Why would anyone start the bidding at $1.2 million, knowing that the seller doesn’t intend to let the property go for that amount? “The seller can see where the bids come in and decide what to do,” Peterson said.

In December, Peterson auctioned a different property listed by Goldman, a historical Lake Forest estate whose sellers, like Busche, were selling their late parents’ home. Prior to the auction, the asking price was about $2.5 million, down from a 2019 asking price of $3.1 million. The property sold for a little over $2.25 million.

In recent years, Chicago-area Wright homes have proven difficult to sell unless they’ve been updated. A renovated home in Highland Park went under contract in 2020 after just three days on the market, selling for its full asking price.

The Busche property is a four-bedroom, 3,000-square-foot house. Wright designed the main wing, about 1,800 square feet, for John O. Carr in 1950. Carol Ann and Edward Busche bought it 15 years later and Edward, a commercial architect, designed additions that mimicked Wright’s lines and used the same materials.

The kitchen and baths are small and somewhat dated, although done in a woodsy, nature-inflected style. The house, which has an outdoor swimming pool, is on 3 acres, and an adjoining parcel about the same size is being sold separately.

A Crain’s reporter visited Carol Ann Busche at the house in 2014. She said that when she and her husband first drove onto the property more than half a century before and saw the low-slung home with a broad overhanging roof that seemed to anchor it to the land, “my heart flew.”

For five decades, the Busches, avid hunters and nature lovers, “felt like we were living right out in the middle of the trees,” she said in 2014. Th couple played a part in saving the Grove, a 145-acre historic property that is next door to theirs and now part of the Glenview Park District.

In 2014, Busche was planning to put the house on the market. (Her husband died in 2008.) She later decided instead to live out her years in the house on Portage Run. She died in January 2020.